A downloadable proof of concept for Windows, macOS, and Linux

Try the command xyzzy for a bit of fun.

Source available on the repository.

Thanks for the feedback haha I never knew you had a Twitch otherwise I woulda watched and chatted however I can give you my twitch and from there we can chat further, I don't stream often btw so I'm a basic account basically however I'm thinking on doing Mixer one day though! https://www.twitch.tv/sarainia_kr_angelsong I will only follow or sub when online so you can see my join/followage appear when you stream! However since I stream once-twice a year following me is fine at any point of time as I'm contemplating Mixer anyways we can talk more bout my game, I have contacted in a few places to say there has been edits and fixes however due to my game being in a jam oddly enough it locked even my main page in even though I was fully aware of the bugs and glitches going on in which I couldn't fix I do know I made a bunch of errors in the way I went about it however the game is not an idle game, Letters are to be pressed once only and Enter key is to be pressed once only! I think there was a few times in the vid you were double tapping the enter key! Also keep note Batch takes into account every key stroke so depending on how many times you pressed enter key it for some odd reason remembers the input and appends it to the timer meaning if you pressed enter key more than once during a meditation it will put you back into meditation! Also default stats are 1 HP, 1 ATK, 1 DEF you chose perma 3 Attack in which you gained +3 so you were 1/4/1 also when you meditated you indeed went up to 5 recheck the video you were 1/5/1 I do agree I made mistakes and I do agree with your input and feedback which ironically everything you said in video was fixed but my game was game jam locked thus I couldn't update it! However my personal playtest everything ran as expected! Last note! Since my save files link to one another they absolutely had to be saved somewhere! How batch works is it needs a spot to create the files and to move the files! I don't think you wanted 20 files spam up the desktop so unfortunately in batch I know you hate it but the only way to do it is unfortunately a direct C drive save I know it sucks I wish I knew more coding languages but I have to deal with a pain of a language so it is what it is sorry but I will still attempt to keep coding in it :D

Hey Joshua so lilou told me to make the game public! The only question I have is why must the game be public if lets say one day My team members want to revisit the project and make a full scale game with an actual price to it? Cuz I was under the impression that having it Restricted means it's only just us can see it maybe there is a way to talk to Itch staff to make it possible next time around that the games don't have to be marked free for all and public! It should only be the submission files free because with all these game jams surely with the millions of games between all jams and all people surely 1 of them is gonna be a Multi Million/Billion dollar hit! Mine in this case is likely not a hit but either way things should be a lil semi private is all I ask! Cuz now if we do revisit this game we now have to change the names of new files to have a price. :)

You can release the jam prototype for free and then later when you complete a commercial version you can upload those files for paid download.

"Public" doesn't mean free. It means the public can see the game page. You can set an individual price for each file download if you like.

Thanks for letting me know Joshua, also let Jorova know the numbers/passwords are in fact existent I wrote a blurb on my page but yes haha my game there is ways to access it in case they missed taking note of the 7-10 digit number it spits out plus the instructions I gave will also make it possible to uninstall later if need be! :D

Seems neat!  Are there any more rooms besides the Main Hall and the coat closet?

Hey! Thanks for playing and for the transcript. Yeah, there are a few other rooms. You have to wait for a certain amount of time (turns) to pass before the "main event" triggers. Probably made it take a bit long given how little there is to interact with.

Ah!  I didn't think of that.  Yeah, I thought either I'd seen everything, or there was some puzzle I was missing.  A shorter timer, or else some hint/indication that you should wait (maybe some comments from the wife?) could help here.

Yeah, the intent was to have more for you to do and fiddle around with so it would be transparent. But that villain of all game jams (limited time) reared its ugly head. 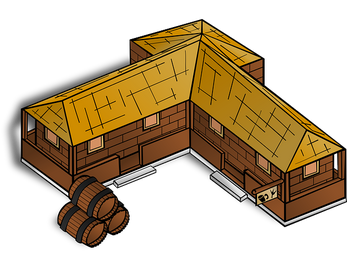