A downloadable visual novel for Windows, macOS, and Linux

You are the new sage at Elwik Mage Academy and must navigate your way through a collection of eclectic sages and students.

What will you need to sacrifice to get your greatest desires?

Want more from the world of Islyndor? Check out Joshua's short story, Pirates in Ariko.

Hey! Played a bit, here's my feedback during the game.

Typo: "after receiving a ltter" - took some time to understand it's "letter", first thought "itter" was some special lore thing xD

Kokay Umar looks like a girl, but story-wise it's dude? :O

I see you managed to remove the wall of text in the beginning (compared to the dev stream), so it's quite smooth for me. Except maybe would be cool to have some little choices in dialogue besides just listening.

After going to save menu, the music restarts.

The character art turned out quite nice!

Oh, it's window in the center of the office! I thought it was a blackboard!

The music track starts to be annoying, because it never changed since I arrived to the school...

How did I know Vyava's name if he didn't say it to me? Some days passed, yes, but a bit confusing.

Ending 6, and very disappointed, I as a player did nothing wrong, but was fired, c'mon!? Talking to students like this - what does Archsage mean at all? :O

Anyway, the game seems overall better than I expected :D Especially, backstory and stuff. Keep it up! 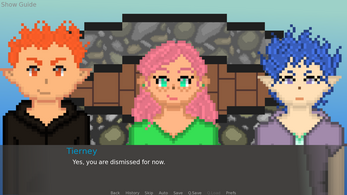 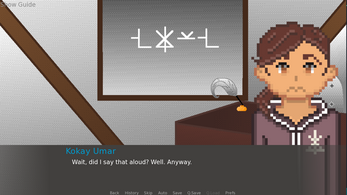 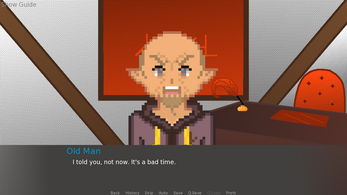