Match an element to its opposite to destroy them both (fire+water, earth+air).

Match a crystal (flashing diamond) to three of its opposing element to destroy them all.

Clear all crystals to complete a level.

You lose if an element locks into the red grid square.

Version 0.1.1 was made for the jam in about 15 total hours, focusing on weaknesses of scope and time management.

See included changelog.txt for changes in 0.1.2 and above.

Drop immediately with spacebar or A button.

You can clear groups vertically or horizontally.

If you clear under a stack of elements, they will fall. Gems will not.

Elements can be used to clear up opposing elements in the "wrong place." If an element touches multiple of the opposite element it will destroy them all (not gems).

Thanks again for the feedback! You'd think as a streamer I would have realized the importance of a pause button. XD

You were intentionally challenging my ability to keep up with chat. I appreciate your meta game sir. 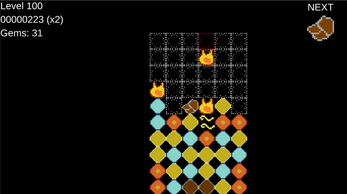