A board game for two players. Thanks for playing!

IMPORTANT: This game has several breaking bugs due to time limitations:

One player controls black stones while the other controls white. Black always goes first. Choose your color in the initial menu - (B) for black and (W) for white.

Win by having the most alive stones at the end of the game. The game ends if either player runs out of cards, both players have no playable cards, or one player is eliminated from the board.

Select one of your cards to play it, then select a highlighted stone, disaster, or tile to perform the relevant action. You play two cards per turn. If you have no playable cards, your turn is passed automatically.

Move: Move a single stone up to two spaces orthogonally or one space diagonally.

Life: Create a new stone orthogonal to one of your existing stones.

Extend/Spread: Advance an active disaster. Extend moves one space but allows a turn, while spread moves two spaces with no turn.

Water goes through itself and through fire. Fire stops itself.

You may only have one active disaster at a time.

The border tiles (darker) are the "dead zone" where no one may live. Any disaster that steps into this zone will immediately stop, but you may start a disaster there.

Here's a list of features that didn't make it due to time constraints. If I revisit this project, this is what will be added:

I couldn't figure this game out.  But I suspect that I would like it if I understood it, and I dig that you created builds for all platforms. :) 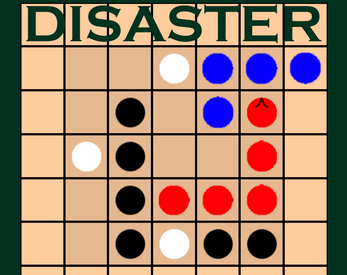